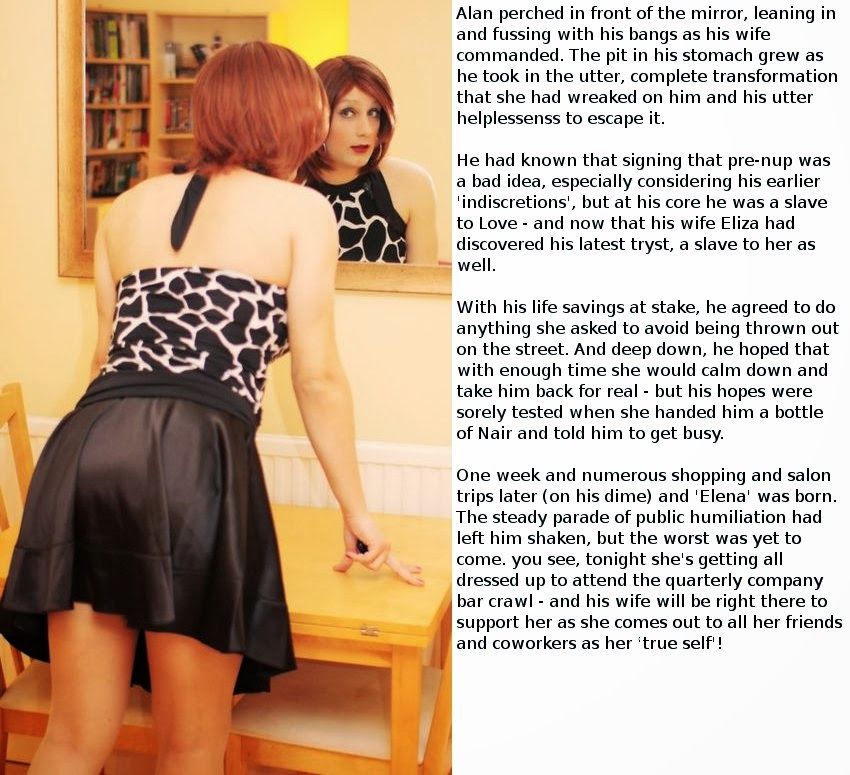 Then, again, out of nowhere she cuffed my hands. This time my feet too, but higher up than before. Next came the gag once again but this time it was a ball gag.

She stuffed it into my mouth and secure it. I could not talk, nor move. Only struggle and murmur into the gag. She loved this torture.

She began wrapping something around my wrists. Lots of it. She expertly tied my wrists together, then my ankles.

Next she removed the cuffs and added more rope that ran around the top of my arms and my fake breasts. I could hardly move, but i didn't want too.

She applied a second set of rope around my thighs and below my knees before hog-tying me. She then left the room. Just left.

I was there for hours and hours, struggling, the tights felt oh-so-good rubbing against my legs as i struggled. Then night fell and i wondered how long i would be left here.

I heard the door open downstairs, she was back! She came into the room and cut off all the rope besides my wrists.

She lay me on my back on the bed and fastened each food to the bed frame via a rope that wrapped around my ankle and was tied to the bed.

My legs were spread now, she could do anything she wanted. She then removed the rope around my wrists and secure them in a similar fashion to the top of the bed.

She straddled me, staring into my pleading eyes. She unfastened the ball gag and kissed me again, tongue and all.

After she was done, she cleave gagged me again and began rubbing my genitals. After i finally peaked, she stood up and walked away. This carried on for the whole week, she threw away my clothes somewhere and tied me in different positions but in the same makeup and clothes as before.

I didn't want to go back to male clothes, something about tights and dresses and heels made me smile. But i couldn't keep up with being tied up all day.

The last day came, her parents would be back later and so would mine. She untied me. And send me home. But she didn't give me back my clothes, oh no.

I was sent home in a new outfit at least. Her school uniform, instructed i must turn up the following day at school in those clothes or else i would be tied and never set free.

This outfit consisted of black tights, black shoes, a black skirt that i kept above waist height to reveal my legs, a black jumped and white shirt, black panties and the black bra with the fake breasts, no lipstick or eyeshadow but concealer and foundation and mild eyeliner.

I arrived home, no male clothes as she had visited my house and replaced my wardrobe with hers. My parents would be home, and here i was, stuck in girls school uniform, looking like a girl and being forced to do it.

But, all the while, loving every bit. Published: Dec 22, Featured in collections. Crossdress by blaqloq. Comments 6. Join the community to add your comment.

Already a deviant? Log In. Reply 1 like. This story describes the fantasy Inside my head I want to be tied up forced to crossdress.

Reply 2 likes. BassKito Student Photographer. Sounds fun. I looked down and what I saw immediately surprised me. The girls got me good.

I was so embarrassed. The first thing I noticed when I looked down was long blond hair on my shoulders and pink lumps on my chest. How did they put me in a wig without me waking up?

I could feel a pair of satin panties between my legs. I noticed that my legs were also restrained by leggings and when I went to look at my ankles, I realized they also put a pair of pink high heels on my feet and painted my toenails white.

The shoes somehow fit perfectly. I was struggling to get out of my restraints when I heard footsteps coming down the basement stairs. Who could it be?

She turned the corner and was looking right at me. She somehow had her full makeup done early in the morning, wearing a light pink slip, fuzzy pink wedge slippers, and her hair in curlers.

Hold tight while I grab some things upstairs. She uncaps the eyeliner pencil, grabs my face by my chin, and proceeds to make a dot on the side of my face.

Aunt B put the camera down and picked up the mirror. Was that me? The girl in the mirror was so feminine.

I actually looked like a real girl! My eyebrows were filled in and shaped. I was wearing heavy blue eyeshadow above sharp cat-style black eyeliner.

The false eyelashes the girls put on me were so long and curvy, they felt heavy on my eyes. My cheeks were rosy with blush and my lips were filled in with dark red lipstick!

I was even wearing sparkles around my eyes and on my cheeks. I could see the black beauty mark that Aunt B added before she took the pictures.

I really looked as feminine as Aunt B. I even smelled like her too. I felt so embarrassed that my cheeks went bright red. Unfortunately they were already bright pink from all the blush the girls put on me.

Aunt B untied me and I was able to take off the girly outfit and wash the makeup off in the bathroom sink. I put on my regular clothes and shoes and continued with my day.

The girls would giggle at me and call me girly names for the rest of the weekend.